A standard Amsterdam canal cruise: how does it work?

This is the mainstream Amsterdam canal cruise that most people make. It consists of a fixed route in a large boat with a captain, along with other tourists. In a rather short time (usually about an hour, sometimes a little longer) you will get a good impression of the Amsterdam canals. Most tours also include the scenic Amstel river and a glimpse of the IJ behind Central Station. The majority of these cruises have pre-programmed audio comments in different languages, while some have English live comments instead. Rates range from about € 12,50 to € 20,- per person. All these canal cruises start and end at fixed locations in the city centre.

NB 1: Scheduled times are the regular peak season times. Always check the current schedule at the tour company itself.
NB 2: AG = pre-recorded Audio Guide, with number of languages.
NB 3: Please refer to the Google Map at the bottom of this page for an overview of all locations. 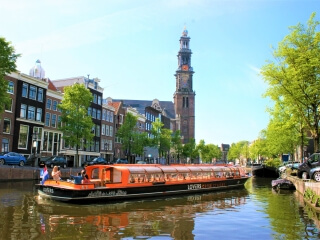 Lovers (named after the original founder) is part of the omnipresent Tours & Tickets group. They offer a wide range of traditional canal tours and are a one stop shop for all favourite attractions and tours in Amsterdam, including museums and bus tours. Lovers’ main dock is in front of Central Station. For the very best rates make sure to use our discount code: RVV10 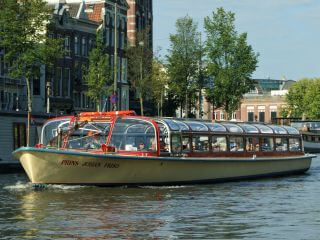 Kooij is a family business and nearly a century old. It is the oldest canal cruise company in Amsterdam. And so it shows, in a positive sense. Kooij has its own neat and very central location (between Dam Square and Munt Tower) and more classical boats than its competitors. 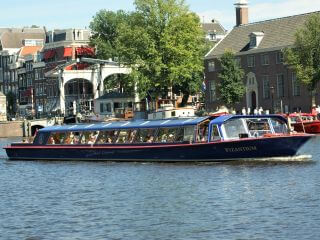 The Blue Boat Company offers a wide range of canal cruises in its clear blue boats. They also organize the Hard Rock Cruise. Their location is close to the popular Leidseplein, the Museum Quarter and the Vondelpark. 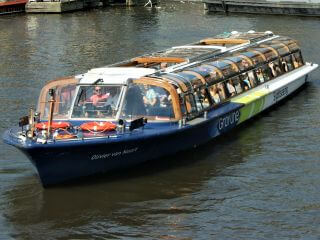 Stromma offers a wide selection of traditional canal cruises in terms of locations and departure times. They also sell other types of canal tours, bus tours and combination tickets for boat and bus tours.

‘Amsterdam Canal Cruises’ is part of the Blue Boat Company and has a similar product range. It stands out with a Kids Cruise and its particular location: directly in front of the Heineken Experience. 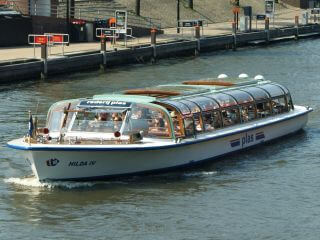 Rederij Plas belongs to the Kooij company and offers the cheapest traditional canal cruise from its dock close to Central Station. In the evening there are more expensive two-hour trips with drinks and snacks on board.